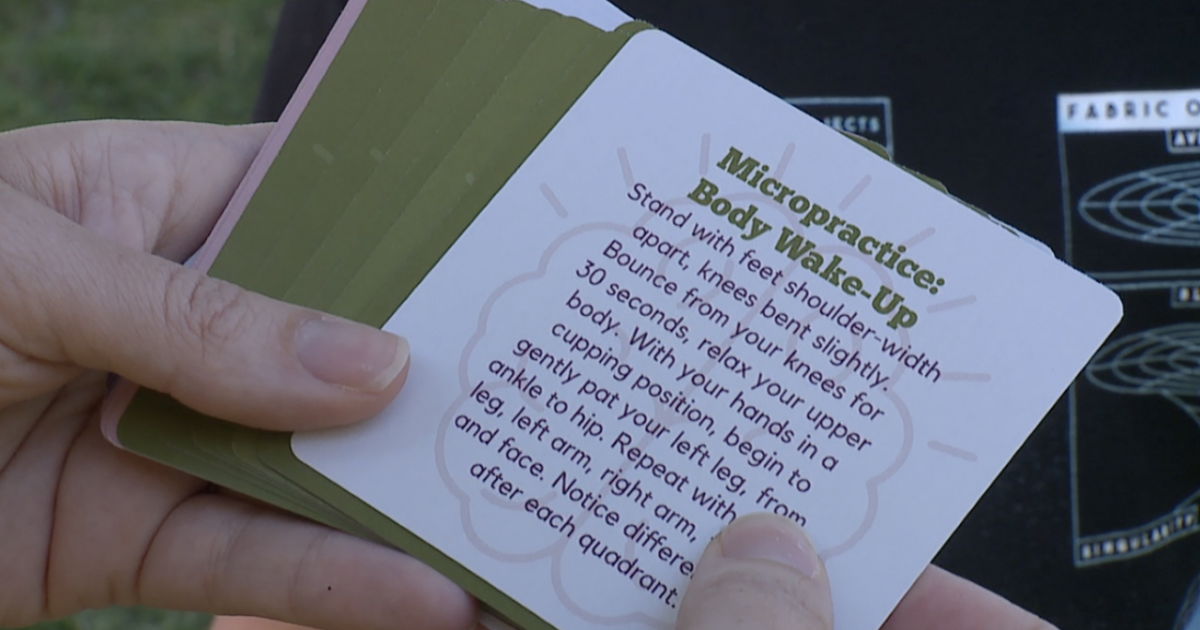 CLEVELAND — Tackling the pressure of daily life doesn’t have to be time consuming.

That’s the message Dr. Jennifer King, a social worker at Case Western Reserve University is sharing with a deck of cards she created early in the pandemic.

“The sort of dose of activity that’s needed to soothe stress response is only seconds or minutes long,” said King.

Her “Take a Break” micro-practice cards feature short stimulation that soothes the body’s response to stress.

“It’s exercises that can be done in three minutes or less. Pattern, repetitive, rhythmic sort of activities, and movements,” said King.

The idea was born out of the way King found herself and her family reacting to all the changes brought on by COVID-19.

“I was realizing that I was applying a lot of what I understood about stress and trauma and the brain and the body to how I was coping and how I was supporting the people around me and coping,” said King.

Those family-friendly strategies are now showing up in hands across Northeast Ohio.

“I wanted to create something that was accessible, that could kind of travel with you, to allow people to have this kind of support on the go and in different settings,” said King.

One of the cards features the five-finger breath.

“That’s simply breathing in and out and tracing your fingers as you go,” said King. “It checks all the boxes. It’s pattern, it’s repetitive, it’s rhythmic.”

King’s 7-year-old son, Roscoe, said the calming practice is his favorite and it really soothes him.

“It’s just really satisfying the way your fingers, the way your pointer finger goes up and down. That’s the soothing part,” said Roscoe King.

Father of two, Steve Leetch, noticed a change in his daughters’ demeanor after completing the heel toe rock exercise.

His outlook on being a parent in the pandemic and the stress it brings is simple.

“The way we try and think of it is like jazz, and so we kind of the drum beat of the jazz and they’re kind of riffing all over the place and we’re just trying to be the steady hum and to not let them pull you too far into the craziness,” said Leetch.

The cards are another option in the toolbox to help parents like Leetch keep life on track when turmoil strikes.

Share
Facebook
Twitter
Pinterest
WhatsApp
Previous articleOfficers involved in the Uvalde massacre may never face consequences because of a web of rules and competing interests – TechBenzy
Next articleENG vs IND | This Indian group of white-ball experts have been built on the back of IPL: Michael Vaughan – TechBenzy